A group of seven Zapatistas, indigenous Mexican revolutionaries, prepare to sell across the Atlantic to peacefully invade Spain and celebrate the 500th anniversary of the Spanish conquest.

On May 3, the Zapatista conquest – three men, three women and one transgender woman – will leave Mexican soil aboard a wooden boat called “La Montana” or “The Mountain”, hoping to reach Spain by August 13 reach The Aztec capital Tenochtitlan fell to the Spanish conquerors in 1521. Instead of drowning the country in blood like the conquerors, the Zapatistas plan a peaceful takeover, which even includes a party when they arrive.

“I declare that this place, which is currently referred to as ‘Europe’ by the people living here, will from now on be called SLUMIL K’AJXEMK’OP, which means ‘rebellious land’ or ‘land that neither gives up nor gives up’ The transgender revolutionary will announce when he arrives in Spain. “And so it will be known to your own people and others as long as there is at least someone here who does not surrender, sell out or give up.”

“If we manage to land and embrace with words those who are there in battle, who resist and rebel, there will be a party of song and dance and the beat of cumbia and the rhythm of the hips will be far off Shaking lands and skies “, proclaimed the Zapatista leader, Subcomandante Galeano. 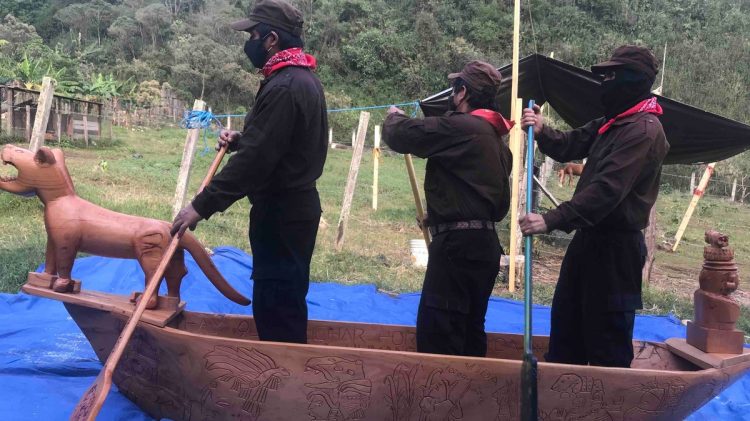 But the now legendary revolutionary, who has led the Zapatistas since 1994, admits there is a chance that La Montana will not be allowed to dock when he arrives in the Spanish city of Vigo. In this case, the seven travelers take four wooden canoes they built to portray different stages of the Zapatista experience and paddle back to Mexico.

It’s not clear how the Zapatistas plan the trip across the Atlantic in wooden canoes, but then again, the entire invasion mission seems a bit strange.

The Zapatistas rose to fame in 1994 when they staged a 12-day riot in the southwestern state of Chiapas to protest against the North American Free Trade Agreement (NAFTA) and to raise awareness of the plight of Mexico’s indigenous people. Under the leadership of the charismatic Subcomandante Galeano, the Zpatistas occupied buildings in several cities in Chiapas. The operation required the intervention of the army to suppress it.

The unusual trip of the Zapatistas, announced in October 2020, aims to send two messages to the Spaniards: 1) “They did not conquer us. We continue to oppose and rebel ”; 2) “There is no need for you to ask our forgiveness for anything.”