There’s Stench, And Then There Is Thioacetone, the World’s Stinkiest Chemical

You’ve probably experienced bad smells before, but as bad as you remember they stink, scientists say it’s nothing compared to the stench of thioacetone, the world’s most odorous chemical compound.

Trash that is in the can for too long on a summer’s day, sewage, or the smell of public toilets that haven’t been cleaned for several days. We all agree that they stink, but their stink is not classified as dangerous to human life. However, the foul aroma of the rare chemical thioacetone is. This simple molecule is a little tricky to make as it clumps together into a solid called trithioacetone at temperatures above -20 ° C, but on the rare occasions mankind has created, thioacetone has literally managed to feel its presence.

The most famous story about the stench of thioacetone dates back to 1889, when workers at a factory in the German city of Freiberg tried to make the simple but potent chemical and accidentally caused panic among the city’s residents. Their success resulted in “an offensive odor that quickly spread over much of the city, causing fainting, vomiting and a panic evacuation”.

Something similar happened in 1967 when British researchers Victor Burnop and Kenneth Latham tried to make new polymers with thioketones and left a bottle of residue open for a few moments. The accident caused nausea in people who work in buildings hundreds of meters away.

“We recently had an odor problem that exceeded our worst expectations,” reported researchers at Eso Research Station. “During the initial experiments, a stopper popped out of a bottle of residue and, although replaced immediately, led to an immediate complaint of nausea and illness from colleagues who worked in a two hundred meter high building [180 m] Path. Two of our chemists, who had studied the cracking of tiny amounts of trithioacetone, were exposed to hostile eyes in a restaurant and were humiliated when a waitress sprayed the area with a deodorant. “

In the early 1960s, when Professor Roland Mayer from the Technical University of Dresden was looking for a group of aromatic, sulfur-containing chemical compounds called thioketones, he was aware of the bad reputation of thioacetone, but was still surprised by the stench to write about it “the smell of this unstable red oil is indeed almost indescribable”. 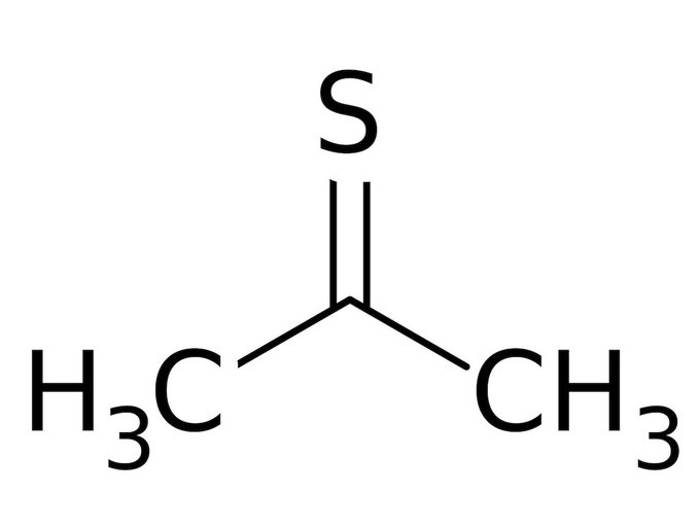 Interestingly, thioacetone isn’t as complicated as a chemical, but no one seems to know exactly why it smells as bad as it does. The sulfur tied to its chemical structure is most likely the culprit, but why this particular compound smells so much worse than others remains a mystery not many chemists would like to solve.

“It just stinks. But that’s relentless and unbearable, ”medicinal chemist Derek Lowe told Sciencemag. “It makes innocent pedestrians stagger in front of the wind, cling to their stomachs and flee in fear. It stinks to such an extent that people suspect evil supernatural powers. “

According to Benjamin Andrikopoulos, a chemistry student at the University of Melbourne, the effectiveness of thioacetone may have something to do with our development. Humans have traditionally associated sulfur with rotting food, with those who could more easily recognize the smell avoiding illness or death and passing the strong sense of smell on to their offspring.

In tens of thousands of years we have managed to smell substances containing sulfur in amounts as low as 1 part per billion or even 1 part per trillion, which is the equivalent of half a teaspoon of sugar in an Olympic swimming pool. With thioacetone, our sense of smell is even more impressive, at least according to reports from researchers who participated in the 1967 Eso Research Station experiment.

“The odors defy the expected effects of the dilution, as the workers in the laboratory did not find the smells unbearable … And really declined the responsibility because they were working in closed systems, ”they wrote. “To convince them of this, they were distributed with other observers in the laboratory at distances of up to a quarter of a mile [0.40 km]and a drop of either acetone-gem-dithiol or the mother liquors from crude trithioacetone crystallizations was placed on a watch glass in a hood. The smell was recognized in seconds before the wind. “

To make matters worse, the odor of thioacetone is also “sticky”, which means that it can take days for even the smallest trace of odor to disappear. As curious as I am about the legendary potency of this compound, I hope I can never smell it for myself. I thought seafood sauce that had rotted for decades smelled bad, but that sounds worse.

Thai Girl Is Sentenced to 43 Years for Criticizing Former King